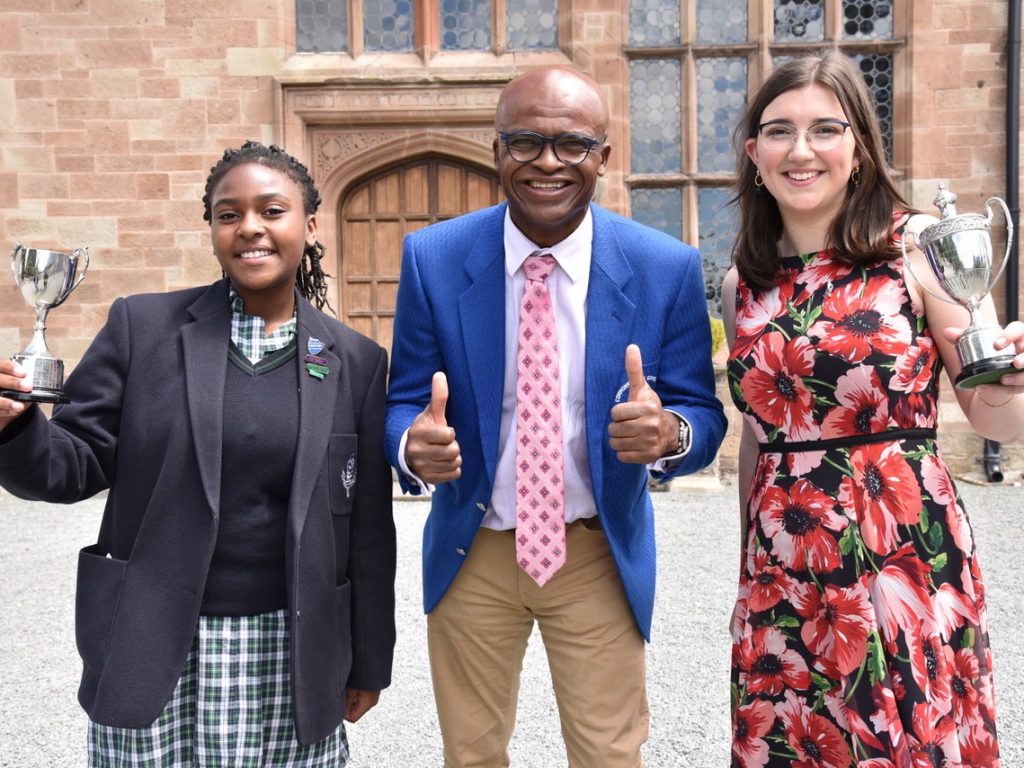 And so the 2021/22 academic year ended with the bang of loud applause, inspiring words, cheers and lots of laughter as British athletics legend Kriss Akabusi took to the stage to help us celebrate the achievements of our students and school this year.

An audience of around 450 people – students, staff, parents, guardians and dignitaries gathered in the marquee, on the lawn, for the annual Adcote Speech Day and prize-giving. And what a celebration it was – a Speech Day that will probably be remembered forever by those who were there.

Our guest speaker Mr Akabusi – triple Olympic medallist and holder of World, European and Commonwealth titles – gave an inspiring talk about his journey from a London children’s home to the top of the athletics podium. The former 400m hurdler and sprinter described the lessons he had learned in life. He told students that to make something of their lives they needed to take responsibility for themselves, make decisions, take opportunities, be ready to accept and learn from others, remember that there were always different perspectives in life, accept that there will always be challenges and understand that, no matter how successful or talented they were, there would be times when they needed the help and support of others.

Kriss Akabusi was one of the biggest names of the Great Britain athletics squad of the mid 1980s and 1990s, smashing records and winning a haul of Olympic, World, European and Common-wealth medals.

He was born to well-educated Nigerian parents in the UK, but his parents returned to their native Nigeria following independence to help rebuild the country, leaving him to be educated in Britain. But after the outbreak of violence and civil war in the country, money dried up and he found himself living in a children’s home.

He said that for years he cried and longed for his mum, until one night, at the age of 14, when he crept out of the children’s home. Outside a rustling willow tree “spoke” to him the words: “Mummy isn’t coming! You must be enough!”.

From that point he realised he needed to make decisions and take responsibility for himself. He admits he was “a clown” at school, but later he joined the Army where his life changed forever.

His athletics potential was spotted by Army sergeant Ian McKenzie who gave him his first running spikes, planned a training schedule and soon Akabusi’s talent on the athletics track was being spotted at a higher level.

“He was an army athlete as well as a soldier. He transformed my life!” said Kriss. Kriss found fame at the 1984 Los Angeles Olympic Games where he won a silver
medal – a medal that he particularly treasures and keeps with him at all times.

His best-remembered race of the era was when the Great Britain 4 x 400m relay team of Roger Black, Derek Redmond, John Regis and Kriss Akabusi spectacularly beat the indomitable USA to take gold at the 1990 World Championships. We relived the excitement of that glory moment as Kriss re-played the race on the large screen.
Kriss ran a memorable blistering anchor leg to overtake the American 400m individual world sprint champion, Antonio Pettigrew, in the nail-biting closing stages of the race and held him off to finish first over the line.

It was Roger Black, the fastest runner in the British team, who was meant to have run the final leg. But. in the early hours of the morning before the race, Kriss had the idea of changing strategy to give themselves a better chance of winning.

“The whole world was running a race that suited the Americans,” explained Chris. By the final leg, the US would be metres up on everybody else. But Kriss saw the race
from a different perspective. Switching the running order by putting GB’s fastest sprinters, Black and Redmond, on the first two legs would give Great Britain the best chance of taking the lead over the mighty Americans in the first half of the race and give Kriss the best chance of snatching victory in the final leg. He “dreamed big” and it paid off. “The team as a whole is greater than the sum of the individual parts,” he said.

Over the past 20 years, Kriss, who is also a TV personality, has made a name for himself as a motivational speaker. And, yes, everyone left that marquee feeling motivated and inspired! Thank you Kriss.

Headmistress Mrs Browne said: “What an honour it was to have the charismatic Mr Kriss Akabusi as our guest of honour at Speech Day. “He was entertaining, thought provoking and deeply inspiring. It was an unforgettable and magical experience, enjoyed by every single member of our lovely prize-giving event.”