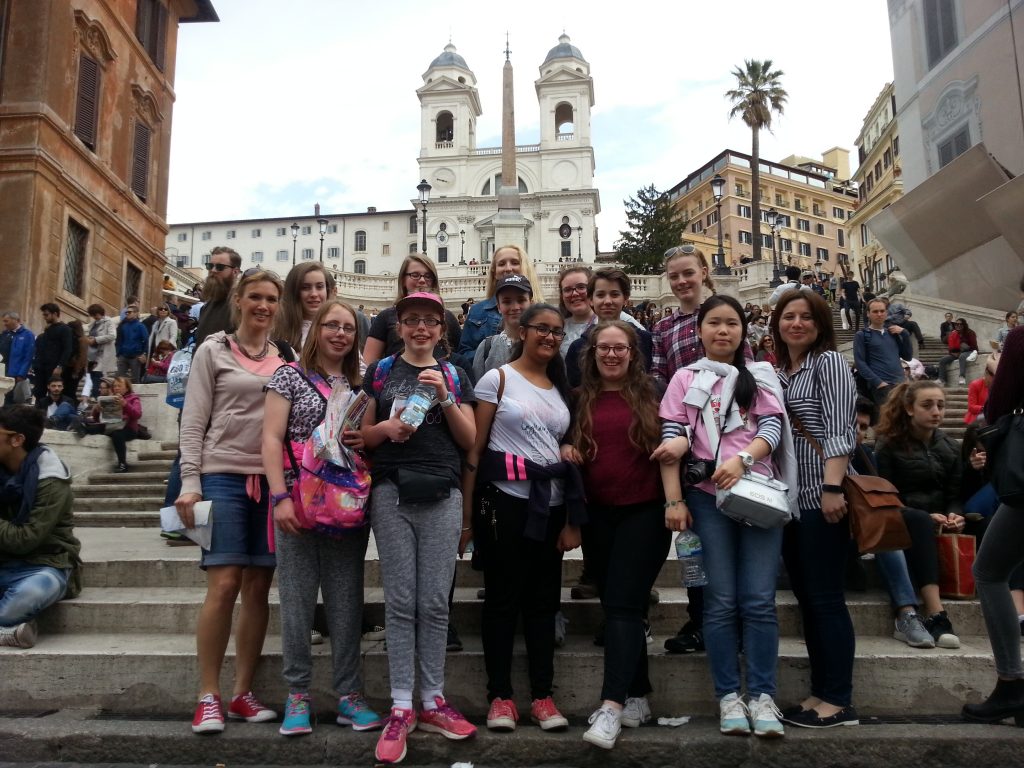 The Adcote Italian trip was a phenomenal success, introducing our girls to culture, history and, of course, gelati of the Repubblica Italiana. Mrs Besterman reports.

Our hotel in Rome stood beside one of Rome’s portae, or huge stone arched gates, still standing after 2000 years.

First stop, the Pantheon, which has the world’s first unsupported concrete roof (still there from Roman times, as the temple was turned into a Christian church). Its 43 foot ceiling and ‘oculus’ hole opening straight to the elements was very unusual. Next was the gorgeous Piazza Navona, with sculptures by Bernini, where the girls had their first Italian gelato of many. The girls threw coins into the the beautiful blue water of the Trevi Fountain with its striking statues.
On Tuesday, we visited the Capitoline Museums and wondered at the enormous bronze of the emperor Marcus Aurelius on horseback and a famous statue of the she-wolf who mothered Rome’s founder Romulus and his twin Remus. We also enjoyed a fascinating tour of the Roman Forum, including remains of its ancient temples and up the Palatine Hill, the millionaire’s strip of its time. After that it was time for our long-awaited visit to the Colosseum. We were able to enter through a special side door which emerged directly into the centre of the arena – we felt like VIPs. The views of the underground passages and of the whole amphitheatre were stunning, and it felt eerie to imagine the thousands of fights which had taken place on that very spot in the name of entertainment. In the evening, we crossed the River Tiber, to Trastevere for dinner, where we ate fresh spaghetti and profiteroles at a lovely family restaurant.

Wednesday saw us visit the Vatican City, seat of the Pope. The girls just about managed to keep silenzio in the Sistine Chapel, with its stunning frescoes by Michaelangelo. After a quick look inside the Basilica itself, where the Pope’s famous balcony looks over the square, it was definitely pizza time.
Sorrento was our base for the second half of the week. In Pompeii, we had a great guided tour round the eerie, tragic, silent streets of the city frozen in time. A highlight of our tour was the house of Caecilius Iucundus, star of the Latin textbook. Although the interior of the house is not open to the public, we could look into his porch and atrium, and even see the mosaic of a sleeping dog (Cerberus, we imagined) which adorned his entrance passageway. In the forum, we were able to see the very arches in which he would have set up his banker’s stall. It was harrowing to see the casts of curled up, asphyxiated bodies at the exit, their impact no less for having seen their images in advance.

Back in Sorrento we were introduced to the traditional way of making gelato. Rhiannon, Susanna and Marni did some expert mixing and tasting.
We also visited the World Heritage site of Villa Oplontis, the holiday residence of the evil emperor Nero’s second wife Poppaea; it was easy to imagine the leisure and ease of her luxurious life, complete with stunning artwork, a landscaped garden and her own private swimming pool.

Next stop was our ascent of Mount Vesuvius; despite the nerves, we all made it up to the crater which gaped almost a kilometre wide. Patches of sulphur and wisps of smoke and steam could be seen emanating from inside. We all took bits of rock and pebble back with us as a souvenir of the volcano.
Down at the seafront, on our final evening, we could not resist a paddle in the sea, wet trousers or not. Some members of the public came to tell Mrs Besterman how beautifully behaved the girls were – a credit to Adcote School.