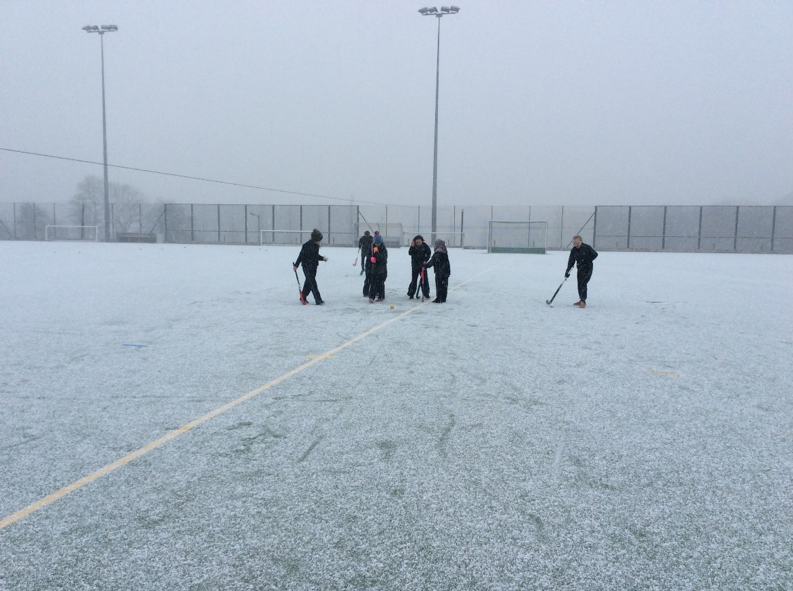 We got there early to get used to the size of the pitch and so the girls could gain experience on playing on waterbase. . . what a privilege! But the snow started, and at one point we were the only team warming up on the pitch.

The sun came out in the first match against Prestfelde. Although the girls were nervous, their confidence grew, which resulted in some forceful dribbling with the ball and the occasional pass. The scoring opportunities increased, and Camren Brooks scored the winning goal to secure Adcote their first victory. In the dying minutes of the match, all other games had been suspended, and although no-one could see as we attacked (and Miss Pugh looked like a snowman), due to the snowstorm in our face, the girls continued to fight on. We then nervously awaited the decision if the tournament could continue.

Despite a snow dusted pitch and not being able to see any lines, the match against Coalbrookdale was on. The girls applied much pressure in the opposing D and their goal keeper made many brilliant saves to keep the score 0-0. However, Ella Thomas showed her great elimination skills to score the winning goal. Isibeal Francis made some brilliant runs down the right wing and took free hits quickly to re-apply pressure on the opposition.

By the time we played Shrewsbury High School the girls passing and pace on the ball had improved considerably. They started to use the full width of the pitch and begun to switch the ball from one side to the other. The defenders, Rosie Stevens and Maddie Stone were stepping up to the game-line to keep involved in the play and made important tackles to deny Shrewsbury any scoring opportunities. Isibeal Francis, Olivia Dyer and Ella Thomas were the driving force of the attacking play, and Camren Brooks used her strength in front of goal to apply pressure on the opposing keeper. The first goal came from Camren Brooks who showed excellent co-ordination to get on the end of a lifted ball from Ella Thomas. But Shrewsbury High School came straight back at the girls and an overload resulted in them scoring. Rosina Relf made an excellent save in goal, but struggled to see the ball coming a second time due to the snowy conditions.

The Adcote girls put in even more effort and this was rewarded when some great play resulted in 2 goals in quick succession. Ella Thomas out-footed the keeper to score the first and Olivia Dyer hit the ball in the far corner to score the last goal. The final score was 3-1.

The team have now qualified to compete with the rest of the Midlands Schools in the regional event on Friday 20th April in Cannock Hockey Club. Lets get practising girls!