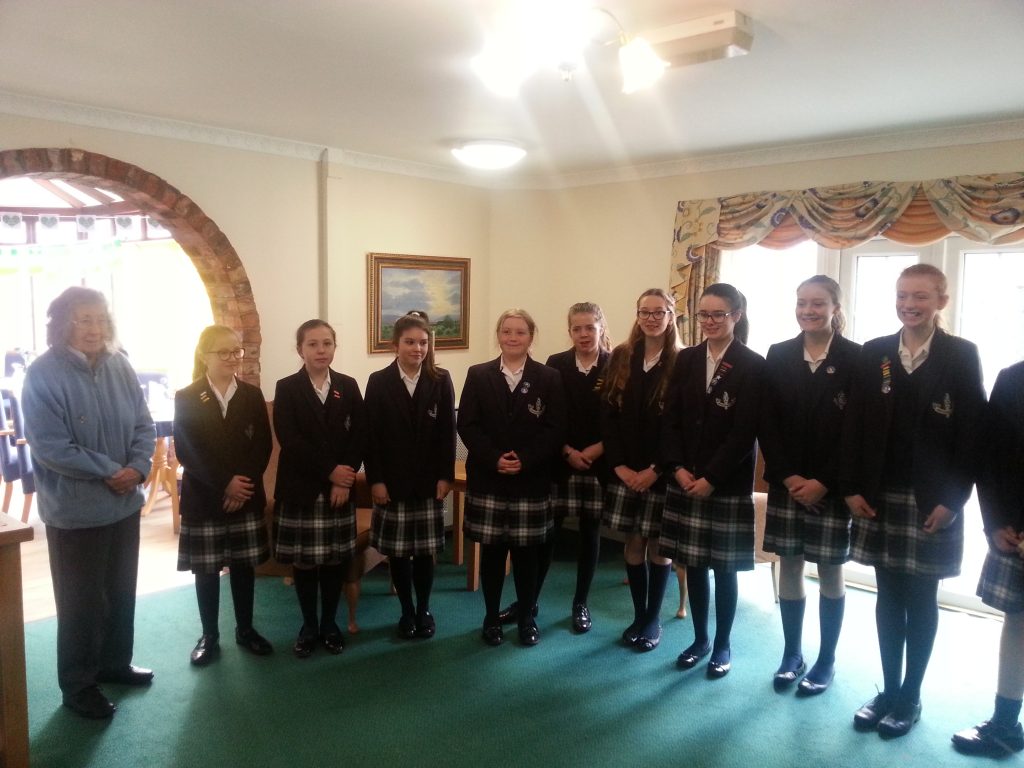 Young performers from Adcote School for Girls took their best singing voices and their pristine shiny cups, to visit two lucky Care Homes this week.  The girls were unable to perform in some of the scheduled events at Oswestry Youth Music Festival the events due to heavy snowfall.

‘It was such a shame that the girls hadn’t been able to perform after they’d spent hours practicing,’ said Chris Bunn, Music Director for the school.  ‘It seemed the ideal solution that the girls should pop along and spread the joy in the local community by singing in the Care Homes!’

Adcote’s ‘Plus Ones’ Vocal Ensemble (Hattie Marsh, Emilia Blackwell, Grace Parker, Hattie Candler and Freya Moxley) won the class with distinction at the Oswestry Youth Music Festival, while Hattie Candler, having gained a distinction winning the under 12s Vocal Solo category, went on to gain the Festival’s inaugural ‘Young Performer of the Year’ award.  Other performances were provided by Adcote Pops and the Adcote Chamber Choir.  Individual performances were by Ruby Allen and Hattie Candler and a duet by Phoebe Dimmack and Freya Owen.

The residents thoroughly enjoyed the experience, joining in, clapping and singing along with the performances.  ‘It was like angels singing,’ commented one of the residents, while the girls chatted enthusiastically with their audience.  Afterwards, Erica Jenkins, Year 8, said, ‘It was a very humbling experience,’ with Ellen Parsons, Year 11, exclaiming, ‘it’s been the best day of my life!’

The girls are pictured with residents of the Landona Care Home in Wem, and Severn View and the Mount, Shrewsbury.