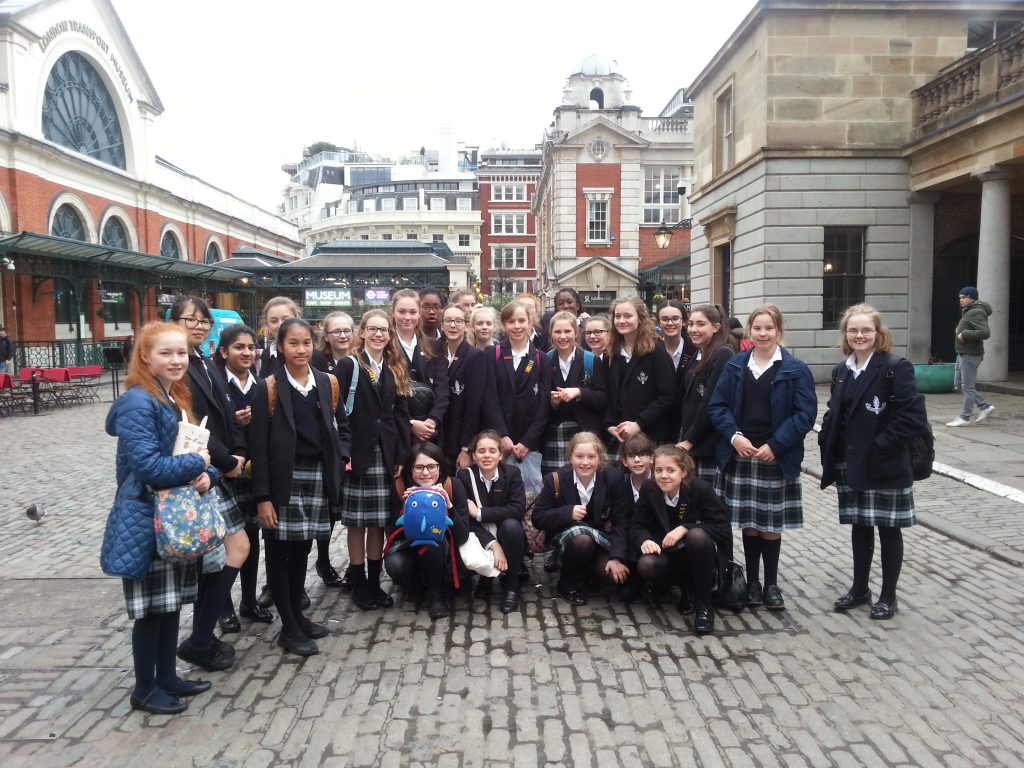 A coach full of very excited Year 8 pupils left Adcote at very early o’clock last Thursday to visit London.  After nearly three hours of non-stop singing with renditions ranging from the Jungle Book to Frozen to Queen, there was great cheering when we finally arrived…at the Service Station!!  Following a top up on sugar and enough supplies to get through the last part of the journey, we headed back onto the coach.  On arrival in London we firstly headed to Covent Garden for some much needed shopping time.  After a quick lunch stop we made our way to Westminster stopping at various sites along the way including meeting some interesting characters in Trafalgar Square and walking past 10 Downing Street.

After successfully getting through airport style security at the Parliament Education Centre, we set off on our tour.  We firstly visited St Stephen’s hall to learn about the history of the building and then proceeded to visit both the House of Lords and House of Commons.  Fortunately, both houses were sitting so they got to go into the public gallery to listen in – the House of Lords were scrutinising a policy on airports and Brexit was the topic of discussion in the House of Commons with John Redwood leading a debate when one group went in.  The tour finished in Westminster Hall which was very relevant as the group have recently been learning about the trial of Charles I in History!

Following the tour and climbing ‘hundreds’ of stairs, the girls were happy to have a sit down as they took part in a workshop to learn more about the process Parliament takes in making laws.  They were then challenged to come up with their own ideas for a law which they got to debate with the chosen topic being equal pay for women in the same job.  They all got really involved and came up with some excellent arguments.  To end the workshop, local MP Daniel Kawczynski, came to speak to the girls and told them about his work as an MP and they had a chance to ask him some questions.  After a quick walk back to the coach and a glimpse of the London Eye it was time to head back.  The second stop at a Service Station was greeted with just as much excitement as the morning stop as there was a McDonald’s there (thank you Beaconsfield Services!!).  A very sleepy coach then arrived back at 10:30p.m!

It was lovely to see the girls all thoroughly enjoying themselves and the tour guides from the Parliament Education commented on how polite the girls were and were impressed with how confident and willing they were to get so involved in all the activities and ask really thoughtful questions.  Bella Sussums Lewis said, “I really enjoyed the trip because it was really interesting and I learned a lot! My favourite parts were the House of Lords because of all of the intricate designs and gold and the workshop because we debated!  The most interesting fact I learned was that you have to have signed permission to have a holiday, and that if you aren’t at the voting gate in time, they’ll keep closing it, even if your foot is in the door!”  Since the trip the girls have been working on putting together an assembly for the Lower School next term where they will share what they learned on their trip.